I have some great information for you today about what’s going on in other parts of the world, but I also want to share with you a conversation I had with an attorney here in the US about their presumptions of what’s going to be happening near the end of the year and why that’s important to you and your surroundings. So good morning American chiropractors, my name is Bharon Hoag, I am the Executive Director of the Chiropractic Defense Council coming to you today, Monday, September 19th, 2022, for your weekly update.

First the good news. You know that we operate in a lot of different countries, New Zealand, Australia, South Africa, and Canada, but very excited to say that New Zealand, which has probably been the most restrictive country throughout this entire process, has finally caved. Last Monday they stopped mask mandates, as of the 26th of September they will no longer be doing vaccine mandates. This is big, not only because it frees up our providers to be able to work and remember, we’ve had providers for over a year that have been going against the government and continuing to practice unvaccinated.

We are so honored to be the organization that defended them and represented them if there were any issues. But now providers can practice without that fear, those that weren’t comfortable practicing or getting back into practice, So we’re very excited about that.

But the second reason that this is so important is that they’re the last country to fall. Having to accept the reality of the data was not what they were claiming, they were holding on to these mandates under false pretenses and they finally had to let go of that, which is a phenomenal thing for our doctors. But it’s also good for the world because the narrative is finally breaking down and we’re having some progress. I already shared with you that in Australia, we’re having states that are starting to release their mandates as well, so we’re expecting everything to open up completely here soon, which is a good thing.

But it’s also very important about the season that we’re in as an organization. Obviously, we grew extensively when there was a fire. Here in the US especially, when we had the seven states that all of a sudden put in mandates, we grew extensively, which is fantastic, but we tend to not want to join things when we’re not under persecution, that’s just human nature, no condemnation there, just a reality, but now’s the time that we have to really start building.

I had a conversation with an attorney out of DC this past week, we were talking about a number of different things, I was actually interviewing them to bring them on as part of our legal team, and he was sharing with me his perspective of really what he’s seeing, not only with the constitutional issues, the politics, the elections coming up, all of that stuff, but really what he felt was going to be the next wave of things going on.

And it was a very interesting conversation because I agreed with most of what he had to say, but he brought a point up that I hadn’t considered, and that was that, yes, whoever they do flex their ability by having a worldwide organized shutdown, it never happened in the history of our world, I’m not sure it’ll ever happen again, but it was a very organized approach, and it showed their skillset. But what happened in that was the resolve of mankind, the resolve, especially here in the United States, of our freedoms, and those that were willing to sit back and believe the lie, and those that were not willing to do so. And he said, “It’s a very interesting reality we have today because they’re not going to be able to take the same tactics they used last time in the next wave, but there is a next wave coming. There’s no way that they did that social experiment and they’re not going to continue to do different things.”

And so he was stating that the power of what needs to happen is the organized groups coming together, and building infrastructure. And I’m not saying that to toot our own horn, it just validated with me the vision that God gave us when we created the Defense Council and how important it is to have an infrastructure that really is ready to go the minute that there’s any type of persecution or crisis, and we’re excited to be that organization for the profession. We’re working with large organizations, with the ChiroCongress and other groups, we’re communicating with the ICA, we’re communicating with the Chiropractic Summit, we’re letting these organizations know who we are, they’re starting to reach out to us and see our value of where we fit in the puzzle. We’re not doing what any of these other organizations are doing, we’re doing something that has never been done in the history of our profession.

It was an interesting conversation, one it validated that there is the framework for them to come out at round two, we don’t know what that’s going to look like yet, but it’s definitely coming, but that is the only way to defeat it is what we’re trying to put in place now, and that’s an organization that is very well organized, very well grouped, we have an infrastructure for communication, we have the ability to get information out. And I want you to understand, that’s why I do these videos every week, I know I don’t have any earth-shattering news for you every single week, but it’s about keeping these lines of communications open, making sure that the infrastructure is in place, that when that crisis happens we can get the information out quickly, effectively, and we’re able to really handle those risks at a very high quick pace.

Now’s the time to build, now’s the time to gain our infrastructure, and grow our network so that we have the ability to move the minute anything happens. We’re going to continue to do our part, so we appreciate you doing yours. Spread the information, stay connected, watch these videos, and together we’re going to be able to do something pretty special for the profession. And remember, our ultimate goal is to make chiropractic the number one healthcare choice in the world, that can only happen when we’re doing this together.

So we love you, we appreciate you, God bless your week and we’ll talk to you next Monday. Be well. (This is a computer-generated transcript. Please excuse any errors.) 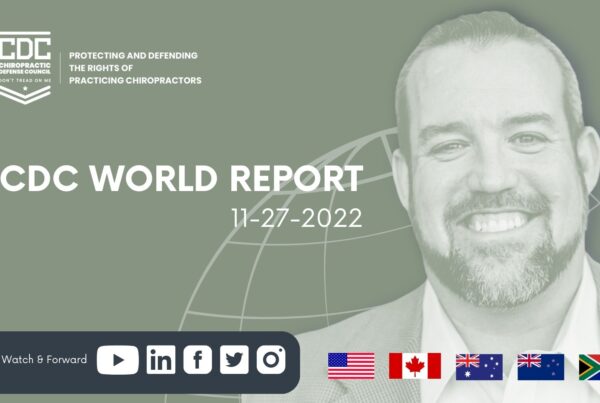 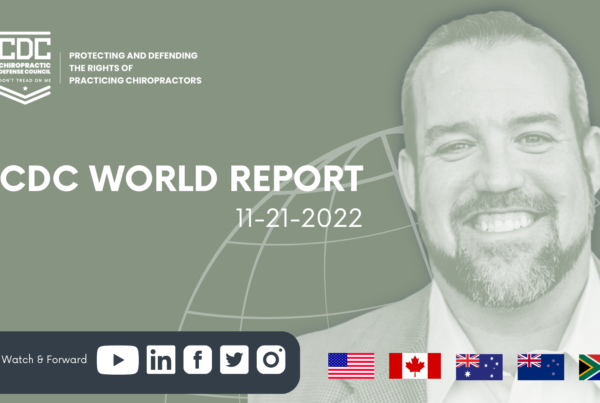